You can get up close to the Whyalla Dolphins as they follow the fishing boats into shore. While it might not be the best known dolphin experience, the Whyalla dolphins are well worth a visit.

Whatever the reason, when there are dolphins around, Nat will have the camera out and seeing them will be the highlight of her day. I’m sure she’d learn to speak dolphin if she could. Given her fondness for them, it wasn’t surprising that she knew about the Whyalla Dolphins.

We’ve seen the dolphins at Monkey Mia and Bunbury. We’ve kayaked with them in South Australia and been on dolphin tours, but this was the first I’d heard of the Whyalla marina dolphins. Nat, of course, was all over it. As we drove to the top of Eyre Peninsula, to snorkel with cuttlefish, she told me all about them.

For years, they have followed recreational fishing boats into the marina in the hope of picking up some fish scraps. There are several stories of the dolphins forming bonds with some of the Whyalla locals.

With the waters at nearby Point Lowly full of cuttlefish, I wasn’t sure how many dolphins would be around during our visit. But that didn’t stop us staking out the boat ramp. We bought some hot chips and a drink, parked overlooking the water and waited for the next boat to arrive. 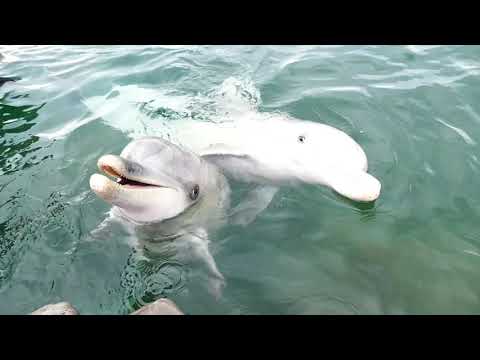 Not long into our vigil a boat entered the marina. It was about halfway into shore when Nat leapt out of the car with the camera. It took me a bit longer to spot them, but sure enough, a couple of dolphins were swimming alongside the boat.

There was us, two or three other people and three dolphins. As the boat docked, the dolphins ‘stood’ with their heads out of the water watching the fishermen’s every move. With no food forthcoming, they turned their attention to the other people on the jetty.

For several minutes they swam up and down the walkways with one eye out of the water seeing what was going on. They would often stop, lift their head out of the water and look you straight in the eye. They were so close and so obviously focussed on you it was quite confronting.

so close you can touch them

Their long curved mouths seemed to smile straight at you. You could see their eyes moving from person to person as they surveyed the jetty. Much like you do with your family pet, you found yourself talking to them, such was the attention it felt like they were giving you.
They were within in arms reach but of course you knew not to touch them. It was tempting to extend your hand and compliment the emotional connection you felt with a physical one. But at the same time, you knew that would be a breach of trust.

Nat was in dolphin heaven. I could see her fighting the urge to wrap her arms around one of them and give it a hug. It was either that, or she was trying to decide what the outcome would be if she jumped into the water with them. In the end, all she could do was fall even more in love with her favourite animal.

We love our Panasonic Lumix Fz1000 Compact Camera. It is the perfect camera for wildlife photography. It has the most amazing zoom and is not too heavy or big. You can easily use this camera in auto mode or switch to manual settings. The auto scene modes such as sunset are fabulous!

Read More :  The best things to do in Streaky Bay

The dolphins cruised up and down the landing for five or ten minutes. They made sure they had a good look at each of the faces staring down at them. As the boat was towed from the water, the dolphins did a final lap of the pontoons and made their way out of the marina.

You can have a dolphin experiences all around Australia but let me give you the tip – Whyalla has them all beat. Yes, you need to wait for a boat to come in and seeing dolphins isn’t guaranteed. But it cost nothing, there aren’t crowds of people and you’ll be close enough to them to smell their fishy breath. It’s an encounter you’ll never forget.

Travel across Australia's iconic Nullarbor Plain on this 9-day tour from Perth to Adelaide. A one-way road trip gives you the chance to see a piece of Australia that most people will never experience. You'll spend 8 nights sleeping under the stars in a swag. Look for Aussie wildlife and admire this remote, arid environment.


Check Prices & Availability
We stayed at the Sundowner Cabin and Tourist park. Set just outside the town centre the park feels clean, tidy and a great place for a few nights. The back gate leads through to the Sundowner hotel with accommodation and great pub meals.

Where: Whyalla Marina in South Australia
Accessible from the Marina
COST – FREE

Bottlenose dolphins are a very social species, and will often work as a team to maximise their harvest. To hunt larger fish, the bottlenose dolphin will stun the fish by using its tail to throw the fish out of the water and catch the prey in its mouth. They swallow small fish whole, or break up larger fish by shaking them, or rubbing the fish on the ocean floor.

Bottlenose Dolphin calves are born in the water after a gestation period of one year and suckle for about 18 months. They remain with the mother for about four years. They are a long-lived species, with an extensive life span of up to 45 years.