Swimming with the Whyalla cuttlefish is one of the great wildlife experiences you can have. From May to the end of August, Whyalla, at the top of the Eyre Peninsula in South Australia, becomes the giant Australian cuttlefish capital of the world.

Whyalla is unique in the world for its wintertime aggregation of giant Australian cuttlefish. They congregate in their tens of thousands to breed on the rocky ledges of the Upper Spencer Gulf Marine Park.

What makes this experience so good is that the cuttlefish are within metres of shore so swimmers of all abilities can see these intriguing creatures. Their pulsating colours, huge eyes and flaring tentacles make them a fascinating sight.

Getting from Adelaide to Whyalla

Whyalla is 385km north of Adelaide at the top of Spencer Gulf. If you find yourself without a car there are flights and bus services to Whyalla from Adelaide. By car, it is an interesting drive from Adelaide. You hug the coast of St Vincent’s Gulf, get views of the Southern Flinders Ranges and pass through the Iron Triangle towns of Port Pirie and Port Augusta.

If you have all the equipment you need, swimming with the Whyalla Cuttlefish is a free activity. You don’t need a permit; you can drive to the site and get straight into the water. If you like the idea of someone else handling the logistics for you, the local dive shop in Whyalla and Adelaide based dive shops run tours. 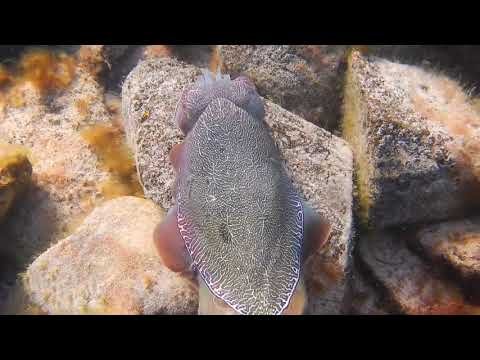 The giant cuttlefish start appearing in May but peak cuttlefish viewing time is June and July. Their numbers start to thin out in August. Depending on the season, even in early August the congregation can be over. For timely updates contact the Whyalla Visitor Centre.

As for the best time of day, we found mornings worked better. There was less wind in the mornings so the water wasn’t as stirred up which meant you could see the cuttlefish better and get nicer pictures of them. If you can time your snorkel with an incoming tide, you’ll find the cuttlefish get pushed even closer to shore.

If you travel with young swimmers, we saw some families take to the water with lilos. Because the water is shallow and quite clear, the kids were able to lie down with a facemask and snorkel on and see the cuttlefish while they floated around. It’s a good option if you haven’t mastered using fins.

Throw you GoPro in the backpack for the best photos and videos on the go. With 12 megapixel photos and 4k video with Stabilisation features it's ideal for action adventures.  The best thing is it's waterproof and perfect for snorkelling, and kayaking. It's small, tough and takes amazing videos. It's a must to record your adventures. We also bought the accessory kit, a spare battery & the water dome.

Where to see the Whyalla Cuttlefish

The cuttlefish breeding grounds are 30 minutes from the centre of Whyalla. They stretch for 10 kilometres between Point Lowly and Black Point. A spot called Stony Point is the most popular place for getting into the water to swim with the cuttlefish.

Stony Point has plenty of parking, change rooms, toilets, a shelter and the best set up for entering the water. As the name suggests, the foreshore around here is quite rocky and negotiating it with your snorkelling gear, let alone a scuba rig, can be a bit tricky. Stony Point has a boardwalk and chain handrail to help you into the water over the uneven surface.

There will be fewer people away from Stony Point. If you opt to see them closer to Point Lowly be aware of the currents that are more active there and look out for boats. You can also get into the water closer to Black Point but there aren’t any facilities.

If you are looking for a great snorkelling mask it's important to have a soft silicone seal for comfort and to ensure no leaks. Mares are worldwide leaders in providing first class scuba diving equipment.  A fantastic option for travelling, the Mares Bonito X One Silicone Mask & Snorkel Set offers premium grade equipment at an affordable price.

The one thing you need to be ready for is the cold. In winter, South Australian waters are between 12 and 15 degrees so be ready to cover yourself in as much neoprene as possible. If you don’t own a full length 5 mm wetsuit, gloves, boots and a hood you will need to hire them. We opted not to get a hood but in hindsight we wished we had. When the water hits your head, you sure know you’re alive!

We have snorkelled in Ewens and Piccaninnie Ponds and the shallow water in Whyalla in winter was colder! It was about 12 degrees for our swims in June. We hired gear before we left Adelaide, but you can hire in Whyalla from Whyalla Diving Services. If you plan on getting your equipment in Whyalla, you should book ahead of time.

Besides the cold, snorkelling with the giant cuttlefish is safe. The stretch of water with the cuttlefish is quite protected. The only sharks you might bump into are harmless Port Jackson sharks that dine out on dead cuttlefish at the end of the season. You might also spot dolphins and sea birds enjoying the cuttlefish buffet as well.

It is worth the effort

It takes a moment for you to adjust to the water temperature and be thankful for your wetsuit but in that time, you will likely see your first cuttlefish. At between 30 and 60 centimetres long they aren’t hard to spot. You’ll see them in only a metre of water. As you go out a little deeper, into two or three metres of water, you’ll see even more, and you can’t take your eyes off them.

Waves of colour pulse across the bodies of the large males as they compete for the attention of the females and ward off other suitors. As they glide between the sea grass and different colour rocks, their appearance changes to blend in with their environment. It’s quite a show.

They can swim head or tail first, propelled either by a jet of water from their siphon or the rhythmic undulations of their fins. Their movement appears effortless and graceful. As spectacular as it is to watch them from above, it’s even better seeing them ‘face to face’. Thanks to how shallow the water is, you can do just that to get some great close up cuttlefish pictures.

Travel across Australia's iconic Nullarbor Plain on this 9-day tour from Perth to Adelaide. A one-way road trip gives you the chance to see a piece of Australia that most people will never experience. You'll spend 8 nights sleeping under the stars in a swag. Look for Aussie wildlife and admire this remote, arid environment.

We swam with the cuttlefish three times over the weekend. We lasted about 40 minutes in the chilly water on each occasion. We could have watched them for hours but when your legs start cramping and you can’t feel your lips, it’s time to listen to your body and get out. Even scuba divers in their dry suits weren’t lasting much longer.

Between cuttlefish swims, make sure you go to the marina to watch the local dolphins follow the fishing boats in. The dolphins swim right up to the pontoon and cruise along looking at everyone who has come to visit them. The Whyalla Maritime museum has a great range of interactive and multimedia displays. A great place to finish your day is Wild Dog Hill, the sunsets are spectacular.

If you’re the kind of person that loves snorkelling and swimming with seals or manta rays or whale sharks, put a winter visit to Whyalla on your list. Swimming with the giant cuttlefish is a unique wildlife experience, there isn’t anything else like it in Australia.

We stayed at the Sundowner Cabin and Tourist park. Set just outside the town centre the park feels clean, tidy and a great place for a few nights. The back gate leads through to the Sundowner hotel with accommodation and great pub meals. If you are diving or snorkeling the little balcony is perfect for hanging out your wetsuit to dry.

The Australian Giant Cuttlefish is a cephalopod which is the same group name as squid and octopus. Males can grow up to 60 cm long and weigh up to five kilograms. They can alter their skin colour at will, for camouflage or communication. They have three hearts that pump a green-blue coloured blood, they live for one or two years and are usually solitary when they are not spawning.

You’ll see cuttlefish in 1 – 2 metres of water, so it is perfect for snorkelling. A little further from shore, scuba divers will have 4 to 6 metres of water to work with.

Whale Watching on the Nullarbor