Why you should try the Port Adelaide Dolphin Cruise

The Port Adelaide dolphin cruise is a unique experience. Not only do you get the thrill of spotting the local bottlenose dolphins, but you also see them in the historical Port River precinct.

The Port River is part of the Adelaide Dolphin Sanctuary. It covers 118 square kilometres and includes the inner and outer harbours and the North Haven Marina. Several dozen dolphins live in the river and hundreds more pass through the sanctuary.

If you haven’t lived or grown up around the docks of a capital city, exploring this environment is a real eye opener. It is fascinating. Heavy industry mixes with fragile mangrove forests and tidal mud flats. As a hub for South Australia’s early settlement and trade, it is also an area rich in maritime and social history.

What makes the Port River dolphin cruise so interesting is seeing the dolphins in such an incongruous setting. The beauty and joy they embody is in sharp contrast to the river’s commercial backdrop. While the area doesn’t have natural beauty, it’s such an interesting place we always enjoy our visits there.

The flagship vessel for seeing the Port River dolphins is the Dolphin Explorer. If you worry about being on a small boat – don’t be. The Dolphin Explorer is huge, it’s much more than a dolphin spotting joy craft.

Getting there and parking

The Port River dolphin cruise leaves from Wharf 1 at Port Adelaide. You can’t miss it. As you get to the end of Commercial Road look for the red and white Port Adelaide Lighthouse.

There is plenty of parking either side of Commercial Road. Even if you have a short walk, it is a great chance to take in the restored buildings in the area. The Port Adelaide Visitor Information is one of them. Pop in for more information on things to do in Port Adelaide.

One of those things to do is the Fisherman’s Wharf Markets which operate on Sundays and Public holidays from 9.00 to 5.00. The markets are in Wharf Shed 1 near the lighthouse. If you plan to do a dolphin cruise on a Sunday, there will be a few more cars around.

Cruises run most days of the week departing at 11.30am; passengers board 20 minutes prior to departure. On weekdays the cruise runs for 90 minutes. On the weekend it is a two hour cruise. Whether you go on a weekday or weekend, the cost is the same.

Ticket prices are $12 per adult and $9 per child 12 years and younger. Babies one or less cruise for free. There are no family or senior concessions. Meal options start at around $27 for adults and $18 for children. There are a range of menu options available.

Because of the size of the boat and the unpredictable nature of wildlife spotting, it doesn’t matter where you sit or stand for the cruise. There are three levels to choose from. We like being up front but there is great viewing from all around the boat, inside and out.

Tasco Essentials Binoculars have 12 times magnification. Whether you're camping, birdwatching, hiking, kayaking, sightseeing or watching live sports, you won’t be disappointed by the optics of this binocular. They are waterproof, so pack them for a walk or paddling down a river.

Shortly after leaving Wharf 1 you pass a couple of old ships. The first is the historic ketch the Falie. Built in 1919, the 33 metre long ketch sailed trade routes around South Australia. The Royal Australian Navy commissioned her in World War 2 to patrol Sydney Harbour.

A little further along you’ll see the oldest clipper ship in the world – The City of Adelaide. First built in 1864, it is now the subject of a major restoration project. The South Australia Maritime Museum in Lipson Street has information on tours of the ships.

Further along the river, you’ll see everything from cement works and grain silos to the Torrens Island power station. Amidst the industry is Snowden beach, a popular fishing spot and mangroves and mud flats which are home to a variety of birds.

The Dolphin Explorer does a U-turn opposite the naval construction yard and makes its way back to wharf 1. But, of course, there are still the dolphins… 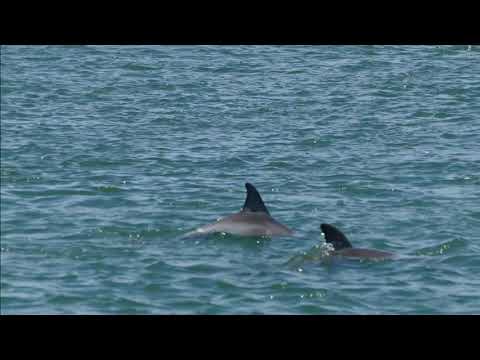 With the possible exception of Adelaide’s two pandas, no other creatures are so fondly regarded as the Port River Dolphins. The creation of the Adelaide Dolphin Sanctuary is testament to the connection locals have with the dolphins.

As with any wildlife experience, there is no guarantee what you’ll see. We have been on three cruises and seen dolphins each time. Sometimes they will be close to shore, other times they make their way up the middle of the channel. On our most recent cruise, they popped up everywhere and even swum at the bow of the coat for a while.

The crew of the Dolphin Explorer seem to have a dolphin spotting superpower. There is a commentary that comes through the speakers, but it isn’t very clear if you are outside. Even so, you can always make out the word ‘dolphin’ when they see them. The passengers who spot them get pretty excited too so it’s easy figuring out where to look.

Whether you see the dolphins from afar or up close, seeing them is an exhilarating experience. There is a real buzz on board when the dolphins appear, they are a wonderful sight.

For a chance to see the Port River dolphins at water level you can also go on a Port River kayak tour. We have done this tour a couple of times and it is great fun. Obviously, it is a more active way to spot dolphins than being on a cruise.

The kayak tour is in a different part of the river. It Leaves from the Garden Island Boat ramp and you explore mangrove lined creeks and the Ships’ Graveyard. The graveyard is the resting place for over 25 wrecks, some dating back to the 1850s.

And, of course, you can see dolphins. We saw them on both of our tours, but again, there are no guarantees. On one of our tours a dolphin swum alongside the kayak. It was super exciting, and we couldn’t believe how big they are up close. At other times we saw them from a distance playing and jumping out of the water.

Kayaks are also available to hire and you can explore the river at your leisure. There are single, double and triple seat kayaks available. The 3 hour tour starts from $70. Make sure you book, it’s a popular activity and a great chance to see wild dolphins.

Explore Adelaide’s own Dolphin Sanctuary and shipwreck heritage trail around Garden Island by sea kayak. You will paddle through wonderful mangrove lined creeks and see a wealth of bird life and sea creatures along with shipwrecks.

Port Adelaide is also home to the South Australian Aviation Museum and the National Railway Museum. The museums are all in the same precinct along Lipson Street, transport buffs will have a great time!

There are a lot of character pubs, craft breweries and cafes in Port Adelaide too. As you stroll between them keep an eye out for the street art in the area. You can get a mural map from the Visitor Centre.

Dolphins aren’t the only wildlife you might see around the Port River. As you’re cruising or kayaking you might also spot New Zealand fur seals or Australian sea lions. The mud flats and mangroves are also home to a variety of birds. Keep an eye overhead for flocks of pelicans.

The St Kilda end of the Adelaide International Bird Sanctuary is 15 minutes away. The sanctuary is home to thousands of birds – some local and some migratory species. When the tide is out, they carpet the mud flats at St Kilda beach.

Near the bird sanctuary there is a great adventure playground which includes a pirate ship on the water’s edge. You can also follow a boardwalk through the St Kilda mangroves. There is plenty of signage explaining what an important habitat the mangroves are. There is a plenty of parking and kiosk; it’s the perfect way to round off the day after kayaking or cruising with the dolphins.

No park pass is required to visit the Adelaide Dolphin Sanctuary, the St Kilda Mangroves or the Adelaide International Bird Sanctuary.

If you prefer to stay on land you can follow the 3.5km cycle or walk along Anna Rennie Path. This loop walt takes you through the Inner Harbour with views of the Port River. Hopefully you will catch a glimpse of a dolphin or two.

In the Adelaide Dolphin Sanctuary there are around 40 bottlenose dolphins that are regularly seen by locals and visitors. Boating, pollution and stormwater is threatening the pod. Careful management of the sanctuary is vital to ensure the dolphin’s survival.

Bottlenose dolphins are a very social species, and will often work as a team to maximise their harvest. To hunt larger fish, the bottlenose dolphin will stun the fish by using its tail to throw the fish out of the water and catch the prey in its mouth. They swallow small fish whole, or break up larger fish by shaking them, or rubbing the fish on the ocean floor.

Bottlenose Dolphin calves are born in the water after a gestation period of one year and suckle for about 18 months. They remain with the mother for about four years. They are a long-lived species, with an extensive life span of up to 45 years.

Head to the Hills – Things to do in Hahndorf

What to expect at Old Tailem Town