Quorn and neighboring Warren Gorge are the gateway to the Flinders Ranges. Four hours north of Adelaide, Quorn is full of history including the iconic Pichi Richi Railway. Warren Gorge, as well as being home to yellow footed rock wallabies, is the perfect place to start enjoying the beauty of the Flinders.

There are lots of things to do in Quorn. If you are on your way to the Flinders Ranges, make sure you allow some time to stop and explore the town. The wide streets are full of historic buildings and places of interest.

Make Railway Terrace your first stop. The Transcontinental, Austral Inn and Criterion Hotels are right next door to each other. The Quorn Railway Station, the Quorn Silos, and the Flinders Ranges Visitor Information Centre are there too.

There is plenty of room to park, picnic and BBQ facilities, and a playground and toilets. Much of the area is under cover so you can keep out of the sun as you plan what to do around the town. Here are a few highlights.

If there’s an activity that’s enjoyed by all ages, it is taking a ride on a steam train. The sound, smell, and sight of them rolling along the tracks is a great source of excitement and nostalgia.

Quorn is home to the Pichi Richi Railway. It is both an important part of the historical fabric of the town and a must do experience for train lovers.

The Pichi Richi Railway opened in 1879 and joined Port Augusta and Quorn. It was part of the Great Northern Railway linking the south to Darwin. It was nicknamed The Afghan Express or the ‘Ghan’ by the railway men in 1923.

In 1929 the railway reached Alice Springs. It was in use until the introduction of the new standard gauge line. The Pichi Richi Railway closed in 1957.

In 1973 the Pichi Richi Railway Preservation Society began restoring the line. From its Quorn base, it operates a museum and looks after the trains and tracks between Quorn and Port Augusta.

Trains run on weekends and during the school holidays. Staffed by volunteers, all proceeds go towards the upkeep of this amazing outback railway. If the train isn’t running for your visit, there is still plenty of steam train related activities for train buffs.

You can take a guided tour of the Pichi Richi Workshop and Railyards. Here you can view restorations in progress and locomotive and carriage maintenance facilities. The Railway Station also has a free museum with lots of train memorabilia, information and even a few dress ups for the kids.

Silo art has become enormously popular in recent years. There are some great murals around the country, but the Quorn silo art has taken the spectacle to a new level.

Each night at sunset, the silos come alive with an animated art show about the history of Quorn. Different presentations display on the silos on different nights. We learned about Quorn’s vital role as a troop transport hub during World War Two. During peak times up to 50 trains per day travelled through the Quorn Train Station.

After the history animation, photographs and paintings from the region project onto the silos. The images include outback scenery, the Pichi Richi Railway, and local townspeople.

The show is free each night and is a must see attraction. It’s well worth staying a night or two in Quorn to enjoy the display.

The walk starts at Railway Station where you can pick up a map. Along the walk are signs with information about each site’s historical significance.

There are 30 points of interest concentrated along Railway Terrace and First Street. Allow approximately 90 minutes to walk the 1.6km loop.

The three historic hotels on Railway Terrace, show how busy Quorn was during its heyday. As we walked by the Austral Inn Hotel we saw ‘Goose’ hitched up out front – it was a nice little throwback to the past!

Quorn as a film set

With its many well-preserved old buildings and historic railway, it is not surprising that Quorn has caught the eye of film makers. The main street and many sites around town have featured in films set in outback Australia.

The first film made in Quorn was Bitter Springs in 1949. More followed including, Robbery Under Arms, The Sundowners, Gallipoli, Rabbit Proof Fence, The Water Diviner and Wolf Creek. If you like your movies, see if you can spot some of the locations!

The Shuttle Chef is the premium slow cooker option - perfect for on the road. Just bring your food to the boil on the stove in the inner pot, simmer for 10-15 minutes then turn it off and transfer it to the outer container, and the Shuttle Chef takes care of the rest - slow cooking your food while you travel!

About 25 minutes from Quorn we saw a tourist sign pointing to the Kanyaka Station ruins. We turned off expecting to see the remains of a couple of buildings. As we reached the top of a hill on the short drive there, we couldn’t believe what we saw.

A dozen or more buildings, many still quite well preserved, dotted the area. It was like a small village. If you have the place to yourself as we did, the area has a wonderful atmosphere. Give yourself at least 30 minutes to look around. There is good signage around the site describing the history of the various buildings.

The main building at Kanyaka Station was an enormous 6-bedroom homestead. It is quite an odd feeling walking around it. First, it’s huge! It is also hard not to go from room to room and imagine people and furniture in them.

The property was originally owned by Hugh Proby, who died in a flood at the young age of 24 in 1852. John Phillips inherited Kanyaka from Proby and set about building the massive property.

The station housed a doctor’s surgery, post office, a hotel for travellers, huts for staff and stables. The ruins of these and other building are all still here in various states of repair.

When the railway line shifted 10 km away in 1881 the property began its decline. Kanyaka is now a state heritage listed site.

Kanyaka Station is only one of the many ruins in the area. We also stopped at the nearby ruins of Wilson Station. It is a smaller but still interesting place to see.

No trip to the Flinders is complete without drives through Brachina and Parachilna Gorge. But, before you get to them, make sure you pay a visit to Warren Gorge. Look out for the brown tourist signs from Quorn or follow Arden Vale Road to get there.

Only 20 minutes from Quorn, Warren Gorge is as spectacular as it is easy to access. Best of all, it is a known habitat for yellow footed rock wallabies. If you want to see one of these elusive animals, go to Warren Gorge late in the afternoon.

Discover the Flinders Ranges on a 3-day tour from Adelaide. You’ll look for wildlife at natural attractions like Wilpena Pound, go wine tasting in the Clare Valley, visit the mountain range’s oldest town, Melrose. All meals are included, & you have 4 accommodation options - camping, a cabin, deluxe cabin or villa. 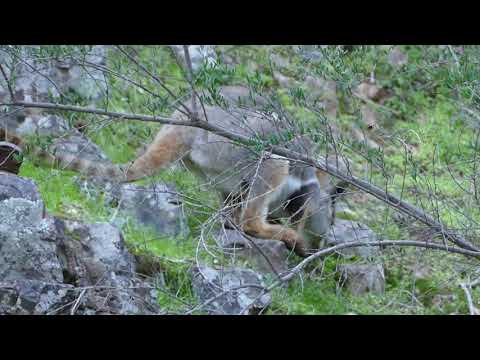 Wallabies and other wildlife

We did just that and within a couple of minutes spotted a Yellow Footed Rock Wallaby. It didn’t seem too bothered by our presence. For 15 minutes we watched it munch on grass and hop effortlessly over the rocks at the base of the gorge.

Wallabies aside, the gorge is spectacular with towering cliffs on either side of the road. The afternoon sun-bathed the walls in a warm glow. There were plenty of birds in the big gum trees lining the creek bed. A little Red Caped robin darted around us as we walked through the gorge. Its vivid red was easy to spot as it flittered from branch to branch.

The 5km loop walk takes you along the gorge, through the campground and to Smoke-Oh Lookout. The easy to moderate walk only has a few short steep sections so is a nice way to see the area.

Warren Gorge is a great camping spot, with large flat sites alongside the creek bed. The sites have lots of shade and access to drop toilets. In the evenings it’s hard to imagine you wouldn’t have a lot of wildlife around your camp site

Warren Gorge is managed by the Flinders Ranges Council. There is a $5 day entry per vehicle or $15 per vehicle for camping. Next time we are in the area, we’ll be certainly be stopping here for a few nights, it’s a beautiful spot.

Tasco Essentials Binoculars have 12 times magnification. Whether you're camping, birdwatching, hiking, kayaking, sightseeing or watching live sports, you won’t be disappointed by the optics of this binocular. They are waterproof, so pack them for a walk or paddling down a river.

Check Prices & Availability
Quorn is located between Mount Remarkable and the Flinders Ranges National Park. The Quorn Caravan Park has a range of accommodation options from powered sites, onsite vans or one or two bedroom cabins. The park is surrounded by parks with native gardens and plenty of birdlife.

We had a great lunch at Teas on the Terrace – a cute little tea room on the main street. Try the fabulous homemade pies and pasties or the soup with hot damper! Yum. We have also heard that Emily’s Bistro is great or the Quondong Cafe. Otherwise you could try a meal at any of the pubs in town.

Take the half day Pichi Richi Explorer from Quorn for $57 per adult and $21 for children over 4 years. There are also a number of different historic train rides available on the Afghan Express, Barwell Bull, Sundowner Explorer and the Coffee Pot Heritage Rail Experience – click on this Pichi Richi Railway link for the various train timetables, prices, inclusions and to book.

Brachina Gorge – The Best Drive in the Flinders Ranges?